In a surprise announcement, the recently appointed CEO of the Volvo Ocean Race, Mark Turner, is quitting following changes to the agreed long-term strategy

Just weeks away from the start of the 2017/8 Volvo Ocean Race on 22 October, CEO Mark Turner has stepped down. The board he reports to announced that the organisation was ‘reconsidering the schedule for future races.’

At issue is the plan to build a new foil-assisted yacht for 2019 and to change the race to a two-yearly cycle.

Turner, the man behind Ellen MacArthur’s sailing career, the Offshore Challenges/OC Sport business and the Extreme Sailing Series, is widely seen as a visionary in the sport. He was appointed last year take the helm of the Volvo Ocean Race when Knut Frostad stepped down.

Since he took over, Turner has substantially reshaped the race by re-introducing a hugely long 12,000-mile Southern Ocean leg from Cape Town to Auckland, producing a new rule to incentivise recruitment of female crew, and improving sustainability.

Turner’s strategic plan, which extends well beyond this edition, was unveiled in May. A raft of changes was announced for a new-look VOR, ideas the organisation trumpeted would take the race into ‘the next decade’. At a carefully planned and co-ordinated press conference in Gothenburg, Turner revealed that the race was to run on a two-year cycle from 2019 and could take a range of potential formats starting in Europe, Asia, the Middle East or in the Americas, and possibly even include a race non-stop race around Antarctica.

At the heart of these plans was a new design to replace the current VO65s, a foil-assisted 60-footer designed by Guillaume Verdier. The current VO65s that are about to start their second race have proved reliable but, in an era of foiling monohulls, are starting to look dated.

This new 60ft foil design would be faster and visually more exciting. The design concept was such that they could potentially also be eligible for the Vendée Globe, and therefore be an attractive proposition for new sponsors and nations.

Finally, Turner’s formula included a fully foiling multihull of 32-50ft for inshore stadium racing in ports of call. This plan drew together all the areas of the sport in which Turner has been involved, and which have wide appeal and large scale audiences. 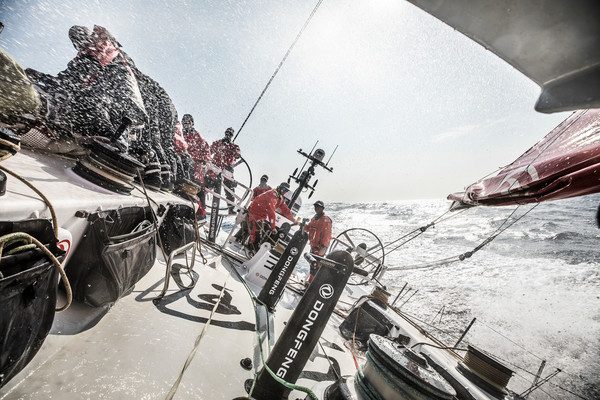 It appears the Volvo Ocean Race board’s plan to shelve the proposals it had previously agreed is what’s behind Turner’s resignation. The timing could hardly be worse, just as the next race gets underway, and it raises serious questions about the future of the race as the foremost ocean and round the world sailing event.

What is behind this about-turn?

Money, say insiders. The word on the dockside is that the race organisation would not sign the contract for the tooling for the new 60-foot design. “He couldn’t get the cheque. They got nervous. Some of the deals for this race haven’t gone across the table,” says a source.

A new, eighth, VO65 was built this year at Persico Marine in Italy in the expectation that there would be a larger fleet this time. But only seven entries have joined, and some of those are not on fully commercial terms. The estimated cost of a fully funded VOR campaign is €10-12m.

This has led to a shortfall in expected revenues, the most likely reason why the Volvo Ocean Race (VOR) board are halting a new project requiring millions of Euros of upfront investment.

The VOR is jointly owned by Volvo Group – which makes trucks, buses and construction vehicles – and Volvo Cars, now a subsidiary of the Chinese multinational Geely Holding. Volvo, once seen as a slightly staid brand, has become one of the most innovative car manufacturers. The company recently announced that it plans to only sell fully electric and hybrid cars from 2019 – just the type of disruptive, sustainable technology that fits well with the Turner’s picture for the race.

What now for the race? Turner’s resignation will have little impact on this edition, which will benefit from many of the changes he and his management team have already implemented.

The race has been given a new lease of life by the entry of so many youth and women crew, and a revamp on the on board reporter programme aimed at getting more nitty-gritty stories off the boats. There is no suggestion that the race will discontinue beyond this, but the future suddenly looks much less exciting.