Why cruising sailors should consider using a professional weather router

If you’re making an ocean crossing this year, employing a weather routeing service could make for a safer, smoother, and faster sail

Should you consider support from a professional weather router on your next ocean crossing? With costs lower than you might realise, maybe it’s time you should. Employing the services of an expert meteorologist is not just the preserve of the record-chasing ocean sailor or professional crew.

Avoiding heavy weather or potentially dangerous conditions is the main reason bluewater sailors seek out weather routeing advice. Stephanie Ball is a forecaster and router in Gibraltar, whose MeteoGib service covers the busy shipping lanes of the English Channel and Strait of Gibraltar, as well as yachts making transatlantic and other ocean crossings.

“Safety is always foremost in my mind,” she explains. “If the accuracy of weather data and availability has improved so much and many storms are now so well documented, why are ships still caught out? Admittedly there are situations when stormy conditions can develop very quickly or where in a vast ocean one has nowhere to go, but I wondered what I could offer to help.

“Data such as GRIB files is now commonly available, but only of use if you are a seasoned sailor with the communications tools to download all the available data, and confident enough in your weather skills to interpret these. GRIB data is fantastic and around 90 per cent of times is correct, but I think there can be an overreliance on its accuracy.

“GRIB data is also only as good as the resolution being downloaded, it can’t always capture the finer detail or tell you the options of a developing storm which perhaps isn’t being handled well. This you would only gauge by reviewing several models. The invaluable benefit that I as a professional forecaster can bring is the improved safety aspect when the weather falls foul, because I have all the data to hand and can analyse the bigger picture.”

Ball’s services were tested in 2015, when a Cat 2 cyclone developed along the route of the 67ft Blue Pearl. “In late October and early November I was instructed by Nicolas Vergnes to help his team with a delivery from Turkey to the Maldives. Weather forecasts were sent every two days as requested with wind, weather, sea state and swell.

“After passing through the Suez Canal, I informed them on 28 October about a low which had developed off western India. Over the next few days this became more of a concern as it intensified unusually rapidly. While communications were difficult in the area, I shifted to sending several forecast updates daily and advised that Nico head for land and seek shelter as a matter of urgency. 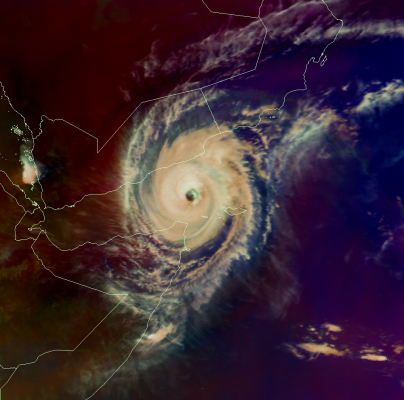 “In the matter of a few days, what had now become Cyclone Chapala had intensified to a Cat 4 or Extremely Severe cyclone, heading into the Gulf of Aden on 2 November sporting winds up to 215km/h and a 30ft swell where it became the strongest cyclone on record to hit the Gulf of Aden. Blue Pearl made it to safety.”

Skipper Nico Vergnes recalls: “When we came out of Bab el Mandeb Strait, things changed for us; Stephanie detected a cyclone rapidly heading direct to the entrance of the Gulf of Aden. Stephanie was with us at all moments, she really worried for us, our security and health. In all she sent us 24 messages with forecasts and attempts to warn/advise us of the cyclone position. We are very grateful for her sending us the forecasts so early and [because of] this we had time to take action. Without her work, our situation would have been completely different and we might not be here to tell our story.”

With so much at stake, why don’t more sailors use a shore-based forecaster?

“Not that many are actually using the service,” says Simon Rowell, who is meteorologist for the British Sailing Team and has forecast for events such as the Clipper Round the World Race as well as individual sailors. “Not among amateur sailors anyway, because I think the perception is that it can be quite expensive and if you’ve done your RYA courses then you know about weather anyway.” 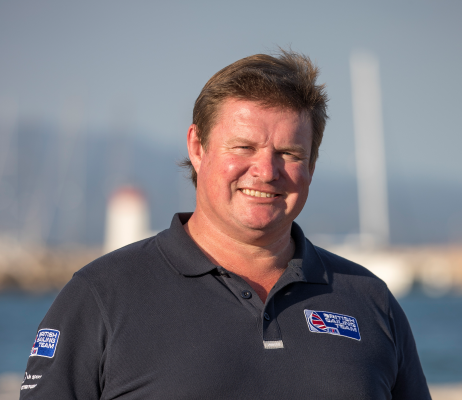 However, Rowell recommends that anyone sailing beyond their comfort zone should consider having some onshore back-up, even if you don’t use a professional service. “If they are going over waters which are significantly further away from their normal cruising ground, or if they’re doing something that is potentially at a more messy time of year, then I would recommend it. For example, if you bought your boat in the Med and you’ve got to get it back home in winter because that’s the only time you can take time off.

“Basically whenever you’re doing something you haven’t really done before, then it’s worth – if nothing else – just picking up the phone and speaking to someone who’s a little bit more experienced or has access to a little bit more data. That’s quite important, and I think it’s important for people like me not to automatically charge £300 for that.

“Even if it’s just a friend that you trust who’s done a lot of sailing and knows his or her way around a synoptic chart, if you ping them an email each day and at least someone ashore is looking out for you.” 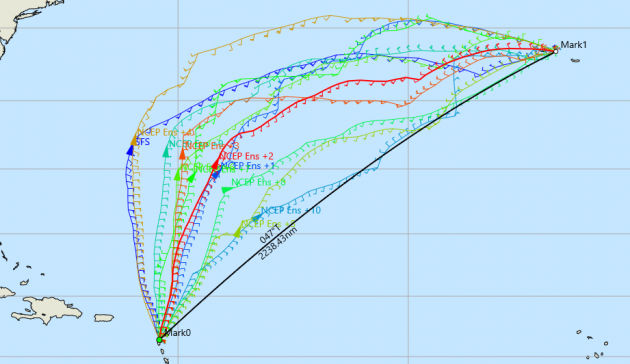 Weather routeing support is not a substitute for having sufficient knowledge on board, and Rowell is keen to point out that he requires skippers to stay engaged with the conditions and forecasting for their own safety.

“If I’m doing forecasting or routeing for, say, people on their first transatlantic, I’ll ask them to tell me every morning at 0600 what the weather’s doing, so basic observations and their thoughts on what’s going on. The way I do it is like leaving a note for the milkman: so if the weather’s fairly settled and they don’t need me to give them any input then they can mail me and say: “We’re at this latitude, this longitude, we’re going in this direction heading towards the next waypoint, and don’t need anything from you today, thank you very much.

“So they’re not locked in to paying for every single day if they don’t want to, but they also have the knowledge that even if they don’t specifically want something back from me that day I am plotting their position electronically and I’m having a look. And if I think that they really should be getting some advice from me I’ll do that anyway.

“What they have, which I don’t, is that vital eyeball on the barometer which is a really important thing, which is why I get them to send it in every morning. If nothing else, it gets them to look at it.”

However, what a forecaster can offer is a huge time saving, both in downloading and examining data. Rowell explains: “I’m sitting here in Cornwall with a massively fast internet connection, whereas if you’re on a boat it’s a bit tricky and really expensive to do. So I have access to an awful lot more weather here than they will on board.

“It’s also the time, and the faffing around. If there’s only two of you or four of you on board, there’s other stuff going on.”

Stephanie Ball adds: “A good forecaster can take the worry out of your sailing, and hours spent poring over charts and pondering the options. A good forecaster should look at various models, and also keep an eye on any real-time data such as from ocean buoys or satellite imagery to help make as accurate a forecast as possible. By tracking your daily progress a forecaster can offer a bespoke forecast exactly to your location. A good professional won’t just look at winds but also sea state and where possible will try and help you avoid the more challenging or uncomfortable conditions for your boat.”

Ball has advised boats that are becalmed and re-routed yachts when the situation changes on board. “For instance my client John Alcantara found himself halfway between Portugal and the Azores with a steering cable failure and having to set up an emergency tiller. It’s having someone to help you make safe decisions for you and your crew, to watch over you and to take the worry out of your sail.”

John Alcantara confirms: “In August 2016, we set off on Citadel, a Jeanneau 54DS, on our adventure. A trip from Gibraltar to Azores and back had been on my bucket list for a while but we never expected a steering cable failure to make the passage more challenging than anticipated. Helming a 54ft boat with an emergency tiller is very hard work. We were almost 400 miles from the Azores when the steering cable parted.

“We considered a diversion to Madeira 175 miles to the south but on advice from MeteoGib we decided that conditions on the 375 miles left to the Azores were more benign.

“The invaluable YB tracker enabled us to stay in contact with Stephanie and feel that someone ashore was aware of our predicament.” 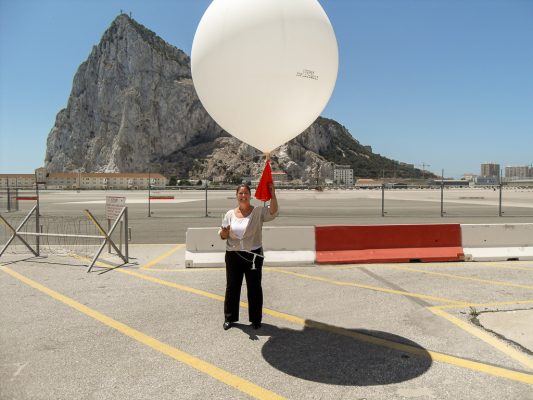 Having someone with a land-based connection crunch the data for you can be relatively cost effective. “The data I use for a standard forecast to send out to people, I’m downloading here probably the best part of a quarter to half a gigabyte per forecast. And over a sat connection that would be an immense cost,” explains Rowell.

There is still a cost associated with receiving the forecast, but this it can be edited down to key information. “I spend quite a lot of time getting my file sizes as efficient as possible so I try and really make sure that the stuff I send them is as small as possible email size, and if they do want pictures – which not many people do these days – then I cut that right down. If it’s GRIB files that they want, then I make sure they are at the most efficient size.”

Ball comments: “It doesn’t have to break the bank. There are various options for accessing professional support including calling by satellite phone, marine planning forecasts, or receiving short simple forecasts to your satellite phone or tracker.”

Simon Rowell says that for an average 40-footer Atlantic crossing, his company Rowell Yachting Services charges no more than £500 for his time and email support.

For an estimated two-week Atlantic crossing, MeteoGib* charges £70 for daily 24hr SMS-type forecasts to a sat phone or tracker. Full support over a two-week crossing, with MeteoGib available for advice, tracking progress and forewarning of inclement weather which may develop across your route, is £140.